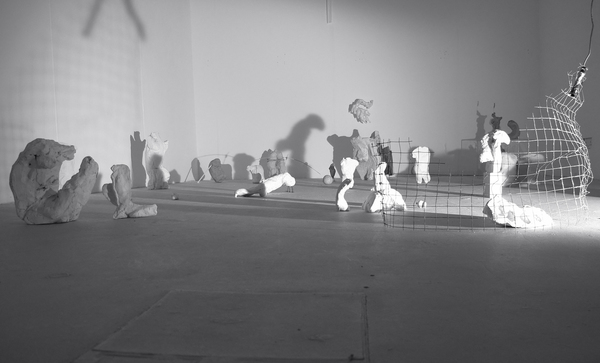 The allegory of the cave, or Plato's Cave, was presented by the Greek philosopher Plato in his work Republic (514a–520a) to compare "the effect of education (παιδεία) and the lack of it on our nature". It is written as a dialogue between Plato's brother Glaucon and his mentor Socrates, narrated by the latter. Plato has Socrates describe a group of people who have lived chained to the wall of a cave all of their lives, facing a blank wall. The people watch shadows projected on the wall from objects passing in front of a fire behind them, and give names to these shadows. The shadows are the prisoners' reality. Socrates explains how the philosopher is like a prisoner who is freed from the cave and comes to understand that the shadows on the wall are not reality at all, for he can perceive the true form of reality rather than the manufactured reality that is the shadows seen by the prisoners. The inmates of this place do not even desire to leave their prison, for they know no better life. The prisoners manage to break their bonds one day, and discover that their reality was not what they thought it was. They discovered the sun, which Plato uses as an analogy for the fire that man cannot see behind. Like the fire that cast light on the walls of the cave, the human condition is forever bound to the impressions that are received through the senses. Even if these interpretations (or, in Kantian terminology, intuitions) are an absurd misrepresentation of reality, we cannot somehow break free from the bonds of our human condition—we cannot free ourselves from phenomenal state just as the prisoners could not free themselves from their chains. If, however, we were to miraculously escape our bondage, we would find a world that we could not understand—the sun is incomprehensible for someone who has never seen it. In other words, we would encounter another "realm", a place incomprehensible because, theoretically, it is the source of a higher reality than the one we have always known; it is the realm of pure Form, pure fact.
Socrates suggests that the shadows are reality for the prisoners because they have never seen anything else; they do not realize that what they see are shadows of objects in front of a fire, much less that these objects are inspired by real things outside the cave which they do not see.The fire, or human made light, and the puppets, used to make shadows, are done by the artists. This can be compared to how illusions are made with light and sound today, with electronics, videos, movies, and 3D visuals. Plato, however, indicates that the fire is also the political doctrine that is taught in a nation state. The artists use light and shadows to teach the dominant doctrines of a time and place.
Plato's cave
Loading...